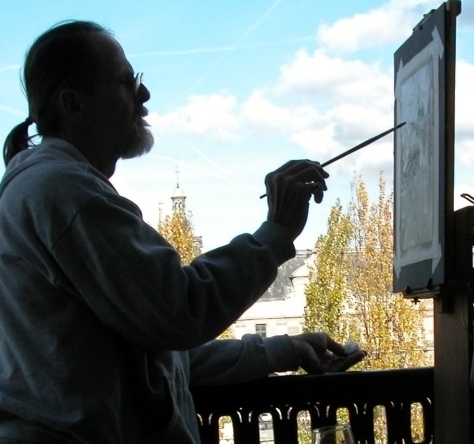 To award-winning artist Robert Eberle, the world is a place of beauty to be explored and captured in oils.  His landscapes win acclaim for their ethereal colors, expressionistic brush strokes and poetic quality.  In addition to “Best of Show” in 2011 and 2003 in the prestigious Hoosier Salon exhibition, Eberle’s works have garnered top awards in every major art exhibition in Indiana.

Eberle’s painting journeys began with his travels across the state of Indiana as one of five artists selected for the “Painting Indiana” project in which he and four other artists set out to depict scenes of Indiana’s ninety-two counties.  Their oil paintings were compiled into the book Painting Indiana published by Indiana University Press in 1999 and later sold at a record-setting auction in 2000.  An outgrowth of the project was the establishment of the Indiana Plein Air Painters Association, a group which today boasts over 200 artists.

Journeys to Europe have inspired his work, beginning with a trip to the southern coast of Spain to paint the colorful villages and seaports.  A visit to Venice to paint the timeless beauty and glowing atmosphere of the canals furthered his fascination with the way light plays on water and highlights angles and surfaces of weathered, historic buildings.  In France he spent a week in a 1000-year-old castle, gathering images to last a lifetime—scenes of ancient chateaus, golden fields, towering cathedral spires and little villages.  A week in Paris added the juxtaposition of the bustle of street life and views of famous buildings teeming with people.

Eberle was one of 15 artists invited to submit works for the Central Indiana Land Trust.  His paintings sold at auction in July, 2007, to benefit the Trust, which preserves parcels of Indiana’s lands for future generations.  Eberle was also one of 30 artists nationwide selected to participate in the inaugural Plein Air Festival in Door County, Wisconsin, summer 2007 and was one of only 10 artists invited back for 2008.  He spent ten days painting lakes, historical architecture, beaches full of people, and open skies as part of the project sponsored by the Peninsula School of Art.  In 2004 Eberle painted the desert Southwest as part of the Arizona-Sonora Desert Museum invitational paint-out.

Trips to the Southwest for art workshops at the Scottsdale School of Art honed his skills and increased his appreciation for the beauty of the desert, and he now winters in Arizona and California, painting mesquite trees and cactus as well as rugged coastline.

Two-time winner of “Best of Show” at the New Harmony First Brush of Spring paint outs, Eberle enjoys the challenge of painting on location.  His work displays his ability to capture the moments of fleeting light and shadow as he conveys the poetry of his subjects.